The 5 Rules of the YALE Endowment Investment Fund

Omega Wealth Management (OWM) SA, from inception, has striven to duplicate the same philosophy for its clients.

OWM’s investment product identification focuses on de-correlated solutions with an ad-hoc research, due diligence and selective approach. On the equity side, structured product constructions offer a risk mitigation to temper market volatility. The master word, DIVERSIFICATION, is systematically applied in order to grasp potential profits, yet reducing price reversals.

OWM are investors, not speculators. We are here for the long term and act accordingly.

Over a period of two decades, from 1994 onwards, Yale’s university endowment fund (USD 24 Billion in 2014) generated an annual net performance of 13.9%. How did they manage this? The answer to this question is to be discovered in their historic asset allocation, see here after: 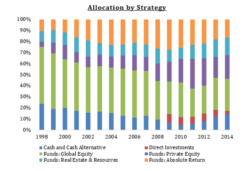 Rule1: Equities: As a reference, may we remind here that a $1.- invested in December 1925 in large US companies would have been worth $5317.-at the end of 2014, the same $1.- in small company stocks $27’419.- A comparable investment, covering the same period,  in a US treasury bonds would have been worth $136.-, in a treasury bill $21.- An absence of capital gain is the price to pay in exchange of predictability and high visibility. Furthermore, passive pure benchmark tracking were eliminated in favor of a small number of active equity managers. To ensure diversification, Swensen, CIO, targeted managers with clearly articulated fundamentals and differentiated disciplined approaches.

Rule 2: Diversification: On the long term, markets are faster and more efficient over market timers. After ten years, only 5% of wealth managers beat their referential benchmark. Diversification is the most efficient weapon to keep uncertainty and unpredictability at bay.

Furthermore, on the venture capital side the Yale team focused on large venture firms that had the network and expertise to select potential unicorns. 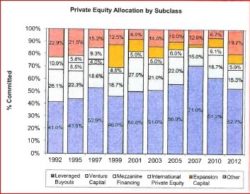 Rule 4: Outside managers: “Multipurpose” managers or banks that pretend to cover efficiently all asset classes, simply lie! To beat a market, one has to master it inside out. To do so, rather than seeking unicorn assets in the various classes, Yale admitted its market limited knowledge and organized a selection methodology to identify top tier actors fully focused on their respective fields.

Rule 5: Incentives: The fund favored remunerations that were intrinsically tied to performance rather than volume. In addition, in order to keep managers in “appetite”, performance participation on long term “carries” were favored versus managerial regular or upfront fees. Yale has seeked to work with managers who were willing to co-invest and be compensated commensurate with their investment performance.

“We believe that focused, local investors can conduct deeper research, build stronger networks, and develop keener insights than those who cover multiple markets and spend limited time in the geographies where they invest”.

Using various techniques, amongst others Monte Carlo simulations were implemented in order to find the ideal risk/reward ratios. Above all, the primary reason for Yale’s superior long-term performance record came from the excess returns generated by the portfolio’s active managers duly selected. Over the 20 year  period ending 2014, it turned out that excess returns came from the least efficient and most illiquid markets, i.e. real estate with an annual return of 13.5%, natural resources 18.1%…and private equity 36.1%!

The fund’s mission was not only to increase its fund capital but also feed on a 35-45% basis the university’s annual needs with an agreed cash return floored to 4.5% and capped to 6%.

In order to ensure sufficient liquidity, the bond portfolio was reduced to a minimum level (6%) but kept for collateral reasons with bank negotiated credit lines should the need arise to generate cash on a short basis, hence avoiding “panic” sales in other non-liquid sections of the portfolio. This turned out to be vital in 2009, where absolute return funds lost -9.3% in the wake of the 2008 subprime crisis. Yale held on and by 2014, the absolute return portfolio had rallied to post a 9.1% annualized gain over the preceding five fiscal years.

Yale sought out partners who targeted distressed sellers and possessed the operating expertise to implement value added strategies that realized substantial returns over the medium term, such as reconfiguring strip shopping centers. The fund also sought to base compensations to come at the end of the fund and to be linked to investors’ return

Yale’s investment in oil and gas went in two directions:

Last but not least:  performance comparisons and benchmarks (see below) 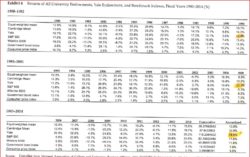 Yale’s endowment fund is a reference. OWM does not pretend to re-invent the wheel. We trust our predecessors in their experience and seek to follow their path with modern tools, organization, discipline and long term strategies.

Latest news on the YALE endowment fund: Nothing is eternal!!

No matter how one considers the Yale fund, despite its brilliant performance, it did not manage to continue on its trend in the recent past. Indeed, The Yale performance for the past year (June 2018- June 2019) was weak considering it was a strong year for two of its favorite asset classes: venture capital and private equity.

Even a simple 70/30 blend of U.S. stocks and bonds would have narrowly topped Yale in the past 10 years. The Vanguard Wellington Fund (VWELX), a simple balanced fund with a 2/3-1/3 allocation to U.S. stocks and bonds, narrowly trailed the Yale endowment in past decade with a 10.7% yearly return. Yale views its 10-year performance as strong considering that the average university endowment has returned just 8.5% annually.

Swensen defended Yale’s strategy in the 2017 endowment investment report, where he sought to rebut comments from Buffett: “In advocating the adoption of a passive indexing strategy, Buffett provides sound investment advice for the vast majority of individuals and institutions that are unable (or unwilling) to commit the resources (human and financial) necessary for active management success. Yet, Buffett’s advice is not appropriate for the cohort of endowments that possess the capabilities to pursue successful active management programs.”

Yet the recent results—and those of the past decade — show Swensen’s strategy of complex—and often illiquid investments—is failing to beat U.S. stocks and a simple mix of stocks and bonds.

That doesn’t mean that Yale will continue to underperform U.S. stocks in the coming decade, but it shows that as Swensen’s favored asset classes become more crowded, it will be tougher for Yale to outperform. And by essentially avoiding the U.S. stock market, it has lacked exposure to many of the world’s best companies and has paid the price.

Given the market context, and particularly high stock valuations, it is perhaps time to cash in the profits and stay away from these markets until the PE return to investment levels. Who will have the last word: Yale or the SP?